I would like to point out an excellent article entitled “Here’s Why Someone Would Need To Own An ‘Assault’ Rifle.”  A couple of noteworthy quotes:

The left keeps asking why anyone needs an “assault” rifle. Here’s one reason — in 2010, a Texas teen used a rifle similar to the one used in Newtown to defend his younger sister and himself from home invaders.

In fact, when added together, knives, blunt instruments and the human body were responsible for more than nine times as many homicides as rifles in 2011. Yet no one is asking why anyone would want to own a set of steak knives, place a heavy candelabra on their mantle or have a hammer in their garage.

Information on so-called “assault weapons” can be seen here, as well as in the Related Posts section shown below.

On January 16, 2013 the court heard testimony on pending Motions in the case relating to my (wrongfully issued) no-seatbelt ticket. Those who testified included myself, my wife, my brother-in-law, and Prairie Grove Police Officer James G. Page. I have quoted particularly relevant passages from the transcript, and also posted the entire transcript, here: http://www.pgjustice.com/transcript.html

More information on this matter can be found on my previous post on LearnAboutGuns.com, the Facebook Page, and www.PGJustice.com.

In October 2012, my wife, our daughter, and I flew from Iowa to McHenry, IL, in order to attend a birthday party and spend time with my wife’s family. As we were headed back to the airport, we drove through Prairie Grove, IL. I was seated in the front passenger seat of my brother-in-law’s pickup truck, which he was driving. My wife was seated behind me, and our daughter was in a car seat behind my brother-in-law. A Prairie Grove, Illinois Police Officer named James G. Page, Badge Number 8227, stopped the vehicle and claimed that he saw me not wearing my seatbelt. I was most certainly wearing my seatbelt, as I always do when in a vehicle (I’m a very safety-conscious person). After running my ID, Officer Page returned it to me and began walking back to his vehicle, ending the traffic stop. I politely asked Officer Page for his name and badge number, as I wished to address this improper stop with the Village of Prairie Grove. In response, Officer Page demanded my ID again, stated that he would write me a ticket with his name and badge number written on that ticket, and proceeded to do exactly that. Myself, my wife, and my brother-in-law all observed that I was wearing my seatbelt throughout the trip in my brother-in-law’s truck.

Through Freedom of Information Act requests, I eventually obtained video from Officer Page’s squad car, which revealed that he pulled over several Ford pickup trucks in a row, as if he were looking for someone in particular and using pretextual reasons like a supposed missing seatbelt as an excuse for the traffic stops. I say that I “eventually” obtained that video, as the Village of Prairie Grove initially tried to say that it was unavailable due to an “error,” and it took my submission of multiple Freedom of Information Act requests to finally obtain that video. In court and under oath, Officer Page later admitted that he wrote me the ticket as retaliation for my request for his name and badge number.

It would have been economically beneficial for me to just to pay the fine – but it would not have been truthful for me to admit fault for not wearing a seatbelt when I knew that I was wearing my seatbelt. So, I am determined to fight that and any other injustices committed by Prairie Grove and Officer Page – despite the costs.

[Note: There are many more details; however this is intended as just a basic summary for those visiting this website.]

Why I say that this is vaguely gun related

Gun rights, like all of our basic rights, relate to the most basic principle that law abiding citizens who are going  about their peaceful business should not be subjected to intrusion into their lives, mistreatment, or false charges at the hands of the government.  When an police officer such as James Page is allowed to get away with wrongfully charging a citizen who has broken no laws, we take a small step closer to becoming a police state where individual rights mean nothing.

I’ve previously discussed the importance of avoiding complacency and standing up for our gun rights by joining the NRA, so that American gun rights don’t vanish like British gun rights.  I would therefore like to ask that those who are not currently NRA members take a moment to join the NRA.  If you’re already an NRA member, then please consider giving an NRA membership as a gift.

Joining the NRA is a great way to help protect our 2nd amendment right to keep and bear arms. Normally, a 1 year membership is $35, but you can join here for $25 – that is a $10 discount.

Join the NRA Today and Save $10 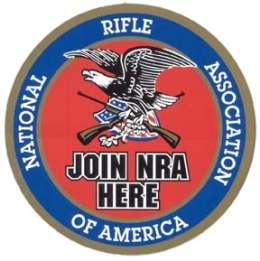 The main reason to join the NRA is to protect our rights. When a city passes an unconstitutional gun law, the NRA is there to defend our rights in court. When the Supreme Court took the landmark D.C. v. Heller and McDonald v. Chicago cases, the NRA was there. When a city tramples the gun rights (and therefore self defense rights) of minorities, the NRA is there.  In short, the NRA is the gun owner’s answer to anti gun groups such as the Brady Campaign and the Million Mom March. Those anti-gun groups are well funded, and have many lobbyists working to make our city, state, and federal officials pass anti-gun rights laws. The NRA has lobbyists too, but lobbyists don’t come cheaply. Neither do lawyers, which is why we all need to do our part and join the NRA.

In addition to helping protect our constitutional right to gun ownership, NRA membership has many other benefits:

Join the NRA Today and Save $10

Iowa Carry, an affiliate group of the Second Amendment Foundation that focuses on concealed carry rights for the state of Iowa, has created its own legislative action center.  From that website, gun rights supporters can easily stay up to date on pending gun legislation and contact their representatives with just a few clicks.  I would like to encourage Iowa residents to take a moment and use the legislative action center to urge their representatives to support HF2255, which would greatly improve Iowa’s concealed carry laws.

I would encourage everyone to check out either the online version or the downloadable (PDF) version of the NRA’s “Fables, Myths & Other Tall Tales about GUN LAWS, CRIME and CONSTITUTIONAL RIGHTS” pamphlet.  It debunks many anti-gun myths, and should be of help when debating gun rights with those who take as fact the anti gun and anti self defense propaganda which saturates the mainstream media.

A couple weeks ago, I mentioned my newest website, MyGunSpot.  It is a social networking website for gun owners, which currently has about 80 members.  At MyGunSpot, you can connect with other gun owners to discuss gun-related matters, join groups, create your own blog, share pictures, play games, find gun-related books/DVDs, use the gun-related classifieds, and stay up to date on gun-related news, all for free.

I’m pleased to announce my latest website, MyGunSpot.com.  It is a social networking website geared towards gun owners:

For those in the Chicago area looking for gun training, I would recommend Tactical Shot:

The firearms related syndication website FirearmsBlogs.com was started earlier this week.  It features content from a variety of pro gun rights blogs – including LearnAboutGuns.com.  As of the time I wrote this post, the included pro gun websites were:

Here are some links to other non-gun related sites that I have found to be useful or of interest:

Below are links to some of my favorite pro gun sites:

Read moreLinks to Other Pro-Gun Sites